Welcome to the Cathedral of St Michael the Archangel!

We are the Cathedral Church of Bishop Kurt Burnette for the Eparchy of Passaic.

We offer services in two locations:

THE SACRAMENTS OF CHRISTIAN INITIATION, Baptism, Chrismation, and Holy Eucharist, are administered together.  Once initiated, infants and children should receive Holy Communion regularly. Baptisms must be arranged at least one month in advance.  New parents will receive some informative catechesis on the sacramental mysteries before the event.

THE SACRAMENT OF REPENTANCE (Confession) is available one half hour before all scheduled services and at other times by request. Special hours for confessions are scheduled before Christmas and Pascha.  Parents will decide when their children are mature enough to examine their conscience and make a confession. Children must be regularly attending Liturgy and must complete a home-based catechetical course on Repentance before requesting the sacrament.

THE SACRAMENT OF MATRIMONY Weddings should be arranged with the parish before finalizing any other details. At least one party must be a Byzantine Catholic.  Wedding preparation, including Pre Cana, should begin no later than six months before the proposed wedding date. Couples are strongly encouraged to attend the one-day Pre-Cana program sponsored by the Cathedral in late winter each year. Contact the parish office to share the good news of your engagement as soon as possible.

PASTORAL CARE OF THE SICK Please contact the Parish Office whenever a parishioner is facing serious illness or hospitalization so that they may be anointed for healing.  Sacramental visits to parishioners who are homebound or in care facilities are made monthly. Please contact the Parish Office to make arrangements. Please do not wait for "Last Rites"! Call for a priest while your loved one is able to make a confession and receive Holy Communion.

FUNERAL SERVICES  The normal practice of the Byzantine Catholic Church is to pray the Parastas service with the body of the deceased at the funeral home and to bring the deceased to Church for a Funeral Liturgy before burial. The funeral services are not served over cremated remains. A memorial service may be served at the cemetery or columbarium before the committal of cremated remains.  Cremated remains should always be committed in this way, not scattered or preserved in the home. A funeral director can make all necessary arrangements with St Michael's Cathedral at time of need.

ARE YOU SEARCHING? FOR GOD? FOR A FAITH COMMUNITY? FOR ANSWERS? Subscribe to our  YouTube channel for an ongoing introduction to the Byzantine Catholic Church, presented by Fr. Jack Custer.

We will be using Come and See, a publication of the Eparchy of Passaic.

You can pick up a free copy at any scheduled service at St Michael's Cathedral or Chapel.

We can mail you a copy for $10.00 postpaid. Just email us at passaiccathedral@gmail.com. On Sunday, January 29, 2023, after more than two years of construction, St Michael's 121 year old edifice became completely accessible to persons with disabilities or mobility issues.  An elevator now welcomes the faithful at the street level and takes them up to the Cathedral or down to the Lower Level, where a new ADA compliant restroom has been installed.  From this level, persons can proceed on foot or with a wheelchair to a platform lift that will provide access to the Cathedral's Lower Hall for social events, cooking and baking.  This project was made possible by the extraordinary generosity of a few parish households and the support of the entire Cathedral parish.

Fr. Jack blessed the elevator before the Divine Liturgy and intoned "Many Years" for the donors.

Honoring Our Lady of Guadalupe Our parish children and their guests enjoyed a hot, homemade breakfast, arts and crafts, and a visit from St Nicholas. 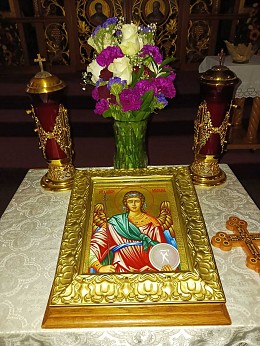 Parishioners and friends of the Cathedral gathered on Sunday, November 6 for the Divine Liturgy to mark the 132nd anniversary of the parish's foundation and the feast of our patron, St MIchael the Archangel.

A buffet lunch followed in St Michael's Hall.  Fr. Jack took the occasion to acknowledge the contribution of parish officers and staff during the past year and welcomed the Sister Servants of Mary Immaculate in attendance.

A lively Tricky Tray raffle rounded out the day's events. Our children enjoyed decorating pumkins after the 11am Chapel Liturgy on Sunday, October 30.  Even a few grown ups got in on the act.  Resident artist Jacquelyn Hrina provided materials and guidance; Michael Sagan donated the pumpkins. Some 75 St Michael's School alumni and alumnae and their spouses shared memories and renewed old friendships.  They enjoyed a tasty Slavic-inspired dinner (with Italian desserts!) and got to tour their old grammar school one last time.  A few Sister Servants of Mary Immaculate, who staffed the school, and former school bus driver Michael Kravec were among the honored guests.  A committee of parishioners including Lynne Krenicky, Diane Popowicz, Kelly Scannell, Donna Portelli, Michael and John Zielonka, helped with decorations and refreshments.  Michael Nahay led the group in recalling stellar moments from their school careers.  A good time was had by all.

view slideshow >
SOMETHING IS COOKING IN ST MICHAEL'S KITCHEN! 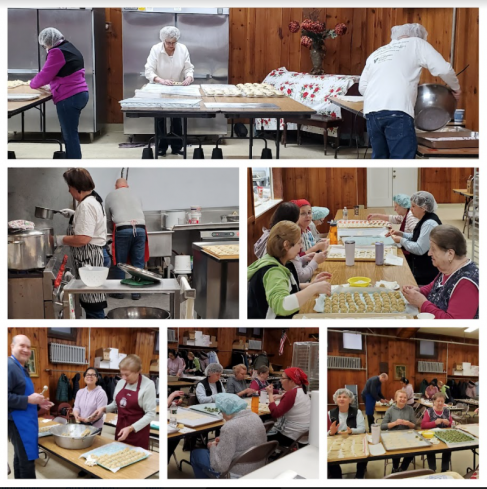 See the bulletin for information about our menu and how to order.

We also offer free on-the-job training for folks interested in learning traditional, artisanal, gourmet foods from the crossroads of Europe!

(That's a trendier way of saying we always need volunteers).

The Great Sanctification of Water on the feast of the Theophany (January 6) recalls the Lord's Baptism in the Jordan and the revelation of the Three Persons of the Holy Trinity.  The newly-sanctified Jordan Water is brought to the homes of the faithful for a blessing in the period between Theophany and the Sunday of Zacchaeus. We thank Fr. Andriy Dudkevych, Sr. Kathleen Hutsko and the eight grade class of St Nicholas Ukrainian Greek Catholic School for their Filipovka Food Drive to benefit St Michael's Food Pantry.  They brought a carload of donated food on Wednesday, December 22 and enjoyed a little tour of St Michael's Cathedral.  We commend St Nicholas School for the fine young people they are forming and for their tenacity in remaining the ONLY Catholic parochial school in the city of Passaic.  May God grant them many blessed years in health and happiness!

Bryan Perez Mejia was sealed with the gift of the Holy Spirit in the Sacramental Mystery of Chrismation on Sunday, October 10, during the parochial Divine Liturgy after several months of advanced catechetical instruction with Fr. Jack Custer.  Bryan's parents, siblings, family and friends were in attendance.  Bryan is a faithful altar server and a great helper in many activities at St Michael's Cathedral.  We pray that the gift of the Holy Spirit will bear abundant fruit in his life and we wish him Many Blessed Years! A small group of pilgrims from St Michael's attended the annual Pilgrimage to the Monastery of the Sister Servants in Sloatsburg NY on Saturday, August 14.

As is our tradition, flowers and herbs were blessed at both Divine Liturgies for the Dormition on Sunday, August 15. Father Jody John Baran, 57, Parochial Vicar of St. Michael the Archangel Byzantine Catholic Cathedral in Passaic, New Jersey, fell asleep in the Lord at Valley Hospital in Ridgewood, NJ on Saturday, July 31, 2021. Bishop Kurt was with him at the moment of his passing.

The son of John and Amelia (Schmeer) Baran, Father Jody was born on August 13, 1963 in Hazleton, PA. He was Baptized and Chrismated at Sts. Peter and Paul Byzantine Catholic Church, Beaver Meadows, PA on August 27, 1963.

Following primary and secondary education in Beaver Meadows and Hazleton, he entered Sts. Cyril and Methodius Byzantine Catholic Seminary in Pittsburgh, PA to begin studies for the priesthood. He was graduated from Duquesne University in 1985 with a Bachelor of Arts Degree in Philosophy.

He continued his theological studies at Sts. Cyril and Methodius Byzantine Catholic Seminary. He received the Order of Reader in the Seminary Chapel on March 21, 1987 by Metropolitan Archbishop Stephen J. Kocisko, who also ordained him to the Order of Subdeacon on December 12, 1987 at the Seminary Chapel. Bishop George Kuzma ordained him to the Order of Deacon at the Eparchial Retreat Center, the Carpathian Village, Canadensis, PA, on May 29, 1988. And, on May 14, 1989 he was ordained to the Priesthood of Jesus Christ at St Mary Byzantine Catholic Church in Wilkes-Barre, PA by Bishop Michael J. Dudick.

Father Jody was very active in the Knights of Columbus. At the time of his death he was the Chaplain of the Juan Perez Council #262 of Passaic, NJ, where he also had the distinction of being Past Grand Knight, as well as District Deputy. He was also serving as Friar of the Monsignor Stein Fourth Degree Assembly, Paterson, NJ; the Assistant Friar of the First NJ District of the Fourth Degree; and the Chaplain of the Paterson Federation.

Father Jody was predeceased by his parents, John and Amelia, as well as by his brothers Darius and Michael. He is survived by his sister Carol Lee Shellock and his brother Charles, and fifteen nieces and nephews.

May his memory be eternal! Stay connected to your parish and continue to worship during the Paschal season.  Liturgical services for Sundays and Holy Days will be available on "St Michael's Cathedral Passaic" YouTube channel both as live streams and as archives you may access whenever you wish.  Copy this URL to your browser: https://www.youtube.com/channel/UCfGN9bRHQ2BbVvjI5sLQPIg or simply search "St Michael's Cathedral Passaic" on YouTube.

ADULT FAITH FORMATION SESSIONS are also available on our You Tube Channel.  These include series on the Resurrection Gospels,  the Mother of God in the Old Testament, the Holy Spirit, and Catholic Social Teaching. If you're a subscriber to our You Tube channel, you'll be alerted when a session is streaming live.  You can always watch it in the archives later.  Use the same link as for Liturgy (above).

Our Food Pantry welcomed some wonderful neighbors today!  Fr. Andriy Dudkevych, Sister Ileana ssmi, and some of the eighth grade students at St Nicholas Ukrainian Greek Catholic Church in Passaic came by to deliver the food they had recently collected in their food drive.  They chose to offer the food to our needy neighbors through St MIchael's Food Pantry and we are grateful!  Thank you  to Fr. Andriy, Sr. Ileana, and all the students at St Nicholas School!  Food Pantry co-ordinators Helena and Paul DeKeukelaere were on hand to accept the gift and to welcome our guests. The Albazinskaya Theotokos, known as "Helper of Mothers" began her tour around the parishes of the New Jersey Syncellate on Wednesday, January 29, with devotions at St Michael's Cathedral.  Bishop Kurt presided and many of the clergy of the Syncellate attended with their families.  The faithful were invited to receive special blessings from all the priests in attendance after venerating the icon.